We use necessary cookies to make our website work and are installed automatically. They enable security, accessibility and network management. As we want to improve your experience with our website, we would like to set functional, analytical and social media cookies which measure how you use our site and enable more personalized content, and provide social media features. Therefore we share information about your use of our website with our partners. They may combine this information with other data that you have provided to them or that they have collected as part of your use of the services. Some of our partner services are located in the USA, which is regarded by the European Court of Justice as a country without an adequate level of data protection. There is a possibility and risk that your personal data will be processed by US authorities for control and surveillance, leaving you without effective remedies against it. With you clicking on "Accept all cookies", you agree that cookies on our website can be used by us as well as third party providers (also in the USA) and that data can be transferred (Art 49. GDPR) unless other suitable guarantees are exceptionally not available. Your consent is voluntary and can be revoked at any time. You can configure cookies under settings.

We use necessary cookies to make our website work: for security, accessibility and network management. They are installed automatically. For this purpose we do not need your consent as these cookies do not process personal data. You have the possibility to change your cookie settings in your browser at any time, but the website might then not work properly.

Functional cookies allow us to improve website performance and customization based on your choices that you make on the website. They are set by us or by our contractual partners who provide their services on our websites with our permission (e.g. website satisfaction survey service). If you do not accept these cookies, some or all of the website's features may not work.

We use Google analytics to helps us understand how you use our website. It helps us to make decisions about general improvements to the functionality and content of the website. The cookies collect information in a way that does not directly identify you.

These cookies are set by a number of social network providers that we have added to our website. These cookies enable you to share content with your friends and networks. When you “surf the internet” these cookies track your browser and build a profile of your interests. In doing so, they influence the content and messages you see on the websites you visit. If you refuse the use of these cookies, content sharing tools may not be available to you.

Season opening of the
A TRIBUTE TO VIENNA
Saturday, 9th of September at 11 00am

VIENNESE RIDERS, VIENNESE MUSIC, VIENNESE SONGS – let yourself be whisked away on a musical journey back into the Austrian imperial past! 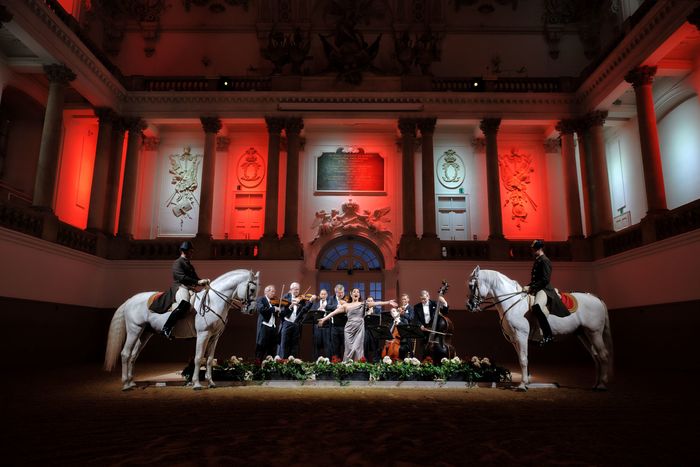 Capriole, Levade and Johann Strauß – the performance of A TRIBUTE TO VIENNA with Prof. Günter Seifert, member of the Vienna Philharmonic Orchestra, and his philharmonic colleagues will share the highlights of the Viennese Ballet of the White Stallions alternating with musical presentations of the imperial period.

The Spanish Riding School presents its most important exercises of the range of the High School – as usual, in highest elegance and harmony – among others the “Pas de Deux”. “On the Long Rein” or the world-famous Schools Above the Ground, for example the Capriole or the Levade.

Professor Günter Seifert presents a typical Viennese repertoire: from the Waltz Song of Johann Strauß Son “Out there in Sievering the lilac is blooming already“,  the "Chineser Galop” by Johann Strauß Father, the “Jubelwalzer” by Joseph Lanner to the ”Radetzky March”, one of the most famous marches in the world, which traditionally concludes every New Year’s Concert and has a highly symbolic meaning for the Austro-Hungarian monarchy.