The Road to the Lipizzaner-Paradise

The road to the Lipizzaner Paradise - enter and be amazed.

They are 3 metres tall, 6ookg heavy and unique in the world. Two impressive life-size Lipizzaner statues line the road leading to the Lipizzaner Stud Piber and will soon be officially named Lipizzaner Street.

To celebrate the 100th anniversary of the Lipizzaner Stud Piber, the manager of the Spanish Riding School, Sonja Klima, commissioned the artist Sascha Eschsenberger, who is known for his horseshoe sculptures, to create two Lipizzaners in the world-famous "Levade" lesson.

Elevated on an almost 2m high pedestal, the two Lipizzaner dams will in future invite visitors to take a look into the fascinating world of the white horses.

Hard facts about artist Sascha Exenberger:
Sascha Exenberger has specialised in the production of horseshoe sculptures. The artist prefers to make animals, mythical creatures, heraldic animals and of course horses.
The 39-year-old exile Salzburger has been living in the tranquil St. Kathrein am Offenegg / Styria for 10 years and is known under his artist name ALM ART. His most famous works include the Styrian Panther at the roundabout in Gleisdorf and the rising unicorn in the town of Perg. 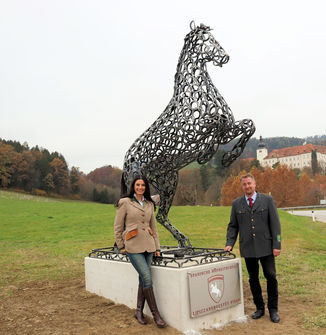 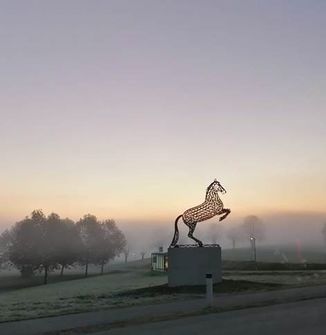